Wow, people are still on here! And I recognize your screen names, though I can barely recall who each one is!

If you can't remember me, I was on a bunch of MUXes and things like that, and I also may have added some people from a brief previous stint at Diablo Valley Community College. The primary roleplaying character I was known for was Junkyard on Project Infinity MUX, though I wandered madly and feverishly through many of those old textual hives and boroughs. I think I played on Tenebrae/Emblem of Ea, an iteration of Crucible City, some of the various nexus games, M3, and hell knows what else. In RL I'm just George. I live in Seattle and am currently going back to school to learn to make film, which I hope to put to use to make history documentaries. I also still write.

As of four months ago I look like this: 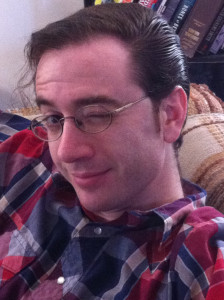 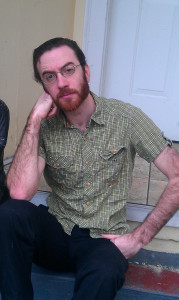 I'm primarily on Facebook or simply IMs as far as my internet use goes these days. Otherwise I'm less of a netizen than I used to be. But hey, nice to say hi again!

Last night, I discovered that some women really like it when you nearly miss knocking an apple off their head.

Last night, I discovered upon slipping down a dinosaur's gullet that there were floors and doors and walls and things. Peeking down into a room I spotted a thieves' guild, just as they spotted me. They were all portly and in nice suits, and they were not pleased with my intrusion.

They were surrounded by piles of pirated software. But, this being the stomach of a dinosaur, it was all outdated.

As soon as I was back outside and on the war wagon, I had a tremendous coughing fit. Out came a copy of Windows XP.

This five-year attempt at comedy has shut down and become a friends-only commiseration.

I've cleaned my friendslist of anyone who I simply cannot remember the identity of or who I have not had any meaningful (for random values of meaningful) contact with as of late.

If I removed you unthinkingly and you think you should still be on my flist, go ahead and comment.

( Oh boy! Jokes about roleplaying games! Gosh, nobody ever does those!Collapse )
Collapse